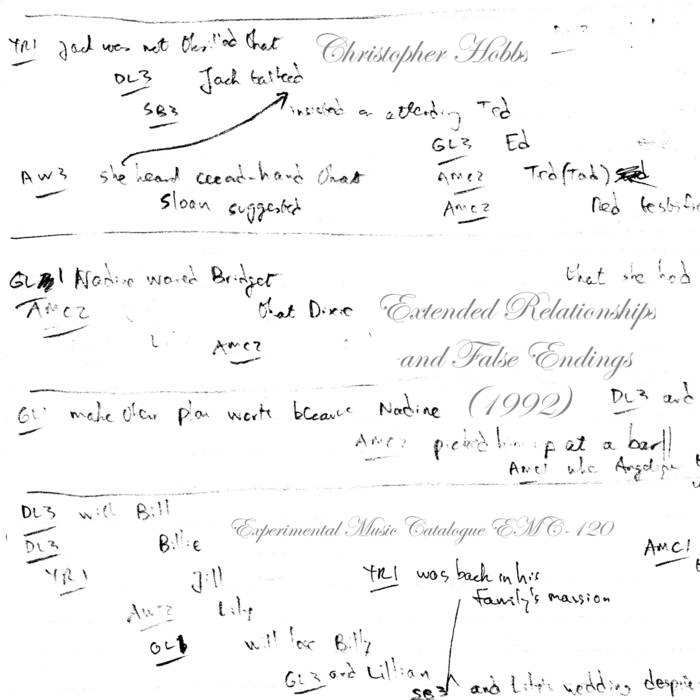 When I lived in California from 1991-93 I was an avid reader of the Los Angeles Times. I was particularly taken with the weekly digests of the various TV soaps—around ten of them. What intrigued me was the similarity of so many of the characters’ names —Jenny, Jenna, Jenna again, Jessica, Jessica again, Jennifer… I began experimenting with moving a sentence describing the activities of one set of characters in a particular soap to another, and thereby building up a palimpsest of storylines. To make life more interesting, I mixed storylines from four weeks worth of digests. My only rule was that each sentence used had to be complete, no matter how many times it was interrupted by sentences from other storylines. I ended up with five separate sets of texts, or movements, separated by short interludes. Producing the text was an arduous and time-consuming business, but also great fun. Having spent some weeks finalising the text I wrote the music - a kind of succession of vamp-till-ready lines - in three or four days. The whole piece was written between December 1992 and February 1993.

Preparing a performance proved tricky. In any one movement there can be up to a dozen different sentences. Finding that many speakers was a near-impossibility, especially since the texts had to be spoken at a particular tempo to fit with the music (I spoke the texts aloud to myself, finding the appropriate rhythms, and then typed them out with bar-lines to indicate how many words would fit in any one bar). In the end I settled for four speakers who divided the various sentences between them. The recording you will hear is a rehearsal tape. The sound quality is poor, and the balance between voices and instruments problematic. But I hope it will give some indication of what I had in mind.